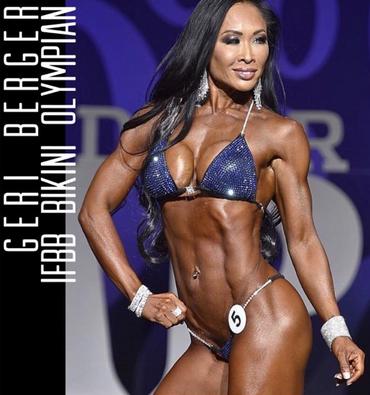 Geri's natural interest and love for sports at a young age lead her to follow a career in the health & fitness industry.  after finishing school in vancouver, b.c. canada, geri earned her Personal Training certification & became a member of the sports medicine council of B.C. in 1991. She immediately began her career in  corporate fitness, group fitness and her own personal training business.

in 1999 geri moved to honolulu, hawaii where she began work as a health

educator & HIV tester/counselor for homeless,runaway & at risk youth at a non profit organization.  Geri continued her work as an independent health & fitness consultant.  wanting to promote the needs of hawaii's neglected youth, geri pursued &  won the title of mrs. Hawaii international in 2004 and became the 1st runner up at the national pageant.  she continued her work with homeless youth until 2007 with the birth of her son.

geri consistently places top 5 in pro bikini and has graced the a stage of arnold's classic australia and the olympia.  she is THE regional general manager and partner of ISLAND CLUB & SPA, a high end luxury fitness club and spa in honolulu, hawaii.  she is a 2nd degree black belt in hapkido, a fitness model, martial arts & kickboxing instructor, marathon & obstacle course runner. geri continues to be active in the  community with non profit organizations.  she sits on the advisory board for hale o honolulu clubhouse, the Hawaii department of health, adult mental health division.

throughout her life, geri's focus and passion has always been on health promotion.  as an ifbb bikini pro, she continues to inspire, motivate and educate individuals on being the best that they can be at any age.  due to geri's many years of experience, her clients are diverse from all over the globe, young to old, beginner to athlete but all motivated by one goal...

to be better than the day before.